Manuel Joseph Walker is a songsmith from San Bernadino, California, using the moniker Foliage for his DIY bedroom pop songs. Having released his debut album at the age of 16, now at 21, Walker is already three Foliage albums into his career, with no. 4 apparently just around the corner. Today marks the release of a new Foliage single called „In Reference To“, the second one this year after „Pattern“, which was released back in April. Over the years, Walker has developed his trademark 80s-jangle- and 2000s-indierock-influenced music into a polished and refined version of dreampop with not too many, but carefully matched layers of instrumentation and a specific guitar sound that seems to be droning just a little bit but adds a broad and carrying foundation to his songs – songs that usually avoid the classical verse-bridge-chorus-middle 8 components, with Walker more often than not opting for a more floating structure of twice running through an A- and a B-part.

If the two singles surfaced so far are anything to go by, what we can expect from Foliage album no. 4 is a further production refinement of these elements, with some added drum machine boldness and lyrics about successfully tackling issues of mental health and insecurity. On „In Reference To“, we encounter a heavily syncopated drum pattern, making the track a stop-and-go affair right until the tension is relieved in a gently flowing B-part. The song revolves around the healing power of songwriting and how it helps letting go of the pressure of faking a fabricated personality. This self-referentiality may not come as a big surprise in someone who spent his teenage years accompanying his life experience with writing the songs to go with it and who has learned to „take the pain and turn it into a song“. Not only as a gesture of self-empowerment, but, ideally, the song will then take someone else’s pain and turn it into something else. Blessed be the ones who have that power. 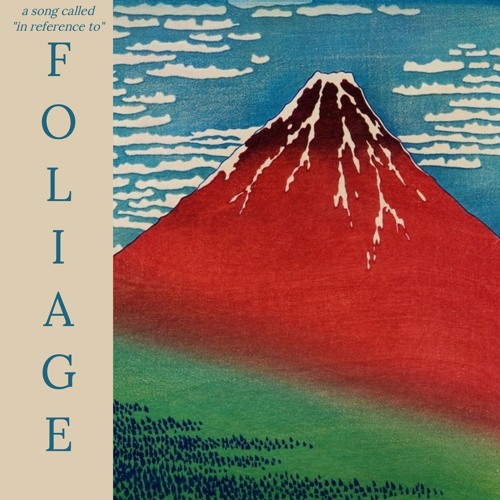 „In Reference To“ was self-released as a digital single in June 2019.