There is a particular brand of 60s-influenced, melodious and light-footed indiepop that has always had a special place in the hearts of German (and, to be fair, Spanish) listeners and bands. Sunshiny pop songs, quite often revolving around the seasons and the weather, celebrating all things leisure and good times. The records associated with it make up a substantial part of the back catalogues of German labels like Marina, Apricot, or Firestation Records (the latter having released a retrospective of the kind of blueprint band who are, for us, linked most strongly with this subgenre – The Cherry Orchard), so it suits nicely that one of the new and most promising bands in that particular field are at least half-German. Nah… are a Dutch-German collaboration between the Amsterdam-based Estella Rosa (who also runs the wonderful Fadeawayradiate blog) and Sebastian Voss (anyone remember Stars Play Music?) from Münster. They started out in 2018 with their debut single Summer’s Failing and have been producing their songs sending files back and forth between the two cities.

Their third and latest single has just hit the shelves. It’s called Apple Blossoms and musically, the title track is a perfect example of the sort of 60s sunshine indiepop just mentioned that makes your heart melt – an upbeat rhythm, crystal clear guitars and chimes, harmonica and perfectly orchestrated girl/boy harmonies make for a supersweet sound, even though the song itself is not exactly a celebration of spring but a lament of feelings and sparkles lost and a melancholy memory of the time when „Apple Blossoms emphasised your charms“ – a lyrical twist that only serves to emphasise the song’s charm. On the flipside, or rather: the second track of the EP, Nah… can be witnessed following their 60s-roots further along, going full Sergio Mendes with the slow, easy listening, bossa nova-style „Primavera“, which even features a spoken-word vocal in Portugese. A beautiful record to enjoy out in the open right now, and it will be even better as the perfect reminder of spring, once the next winter is here. 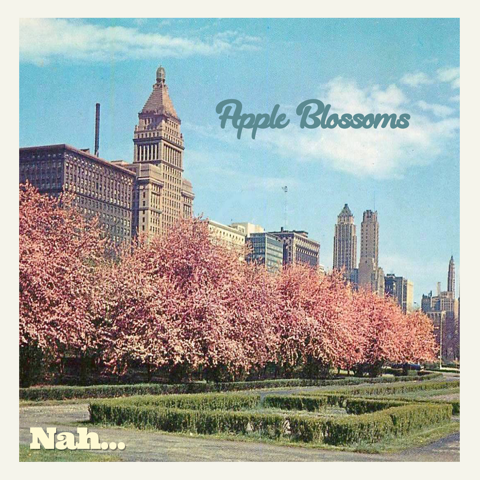 Apple Blossoms was self-released on CD and as a digital single in April 2019:
https://nahtwee.bandcamp.com/album/apple-blossoms-single