We don’t really know what twee is anymore, do we? Not at least since Marc Spitz in his 2014 book tried to portray it as a wide-ranging cultural movement, vaguely drawing a line from JD Salinger to Kurt Cobain and beyond, but effectively killing any distinctive use the term may have had before (still a good book though, mind), be it pejorative or affirming.

We’ll add to this that we have never felt it to be a demeaning attribution (as which it was thrown at just about every record that the Sarah label released) but much rather one to be worn as a badge of pride. So while Katie Bennett would probably roll her eyes (as, indeed, many of you may) at it, when we say we feel she has been the cutting edge of twee for a while now, it is meant as an expression of praise indicating she might well be to late 2010s US kids what Belle & Sebastian were to late 1990s UK kids. Bennett has been releasing music as Free Cake For Every Creature since 2013. Her latest album is called The Bluest Star and is her third on the Brooklyn label Double Double Whammy. While her band name in itself can easily be seen as a twee indicator (taking a tough socialist slogan but cuting it down to a call for a yummy trivia for all, including wildlife), The Bluest Star also revels in an essentially twee attitude, manifest in a strong taste for the cute, quirky, and quaint, in out of focus snapshots, in an unfiltered, direct authenticity – the constructed lack of construction, as it were, or, in other words: the ‚I try to look as if I haven’t tried‘-approach.

The 14 songs on The Bluest Star, coming in at just under 40 minutes, are a trip back on memory lane for Bennett in that, unlike predecessor Talking Quietly Of Anything With You, the album was not recorded in a studio/full band setting but shows Free Cake For Every Creature back at the most basic DIY bedroom recordings of the very beginning. Whereas this probably makes a huge difference in terms of making an album, the difference in listening to it isn’t as significant. The songs aren’t a massive departure from what we’ve known Bennett to do but rather follow the pattern she has stuck to throughout her recording career, with an overseeable set of chords, a restrained instrumentation and Bennett’s charmingly whispering singing mixed to the front. In contrast to the previous LP, however, The Bluest Star is, with a few exceptions, far more retracted, quiet, slow and bare, with the meditative songs outnumbering the euphoric ones.

The sheet coming with the record informs us that on the new album, Bennett devoted a lot more attention to the songs’ lyrics than before, rather than recording her thoughts straight to tape (which in itself can be seen as a construction, one might add, cf. above), and indeed a stronger sense of reflection, pensiveness and imagery is perceptibe throughout the record. Even so, whatever is subjected to her lyrical gaze always remains super-tangible, with the focus on the little, unremarkable and only seemingly meaningless moments in life. Furthermore, a quirky bookishness remains firmly in place – the sparkling „Around You“ managing to mention not only throwing a book out a library window but also making a reference to the letters between Anais Nin and Henry Miller. A significant change, compared to Bennett’s earlier recordings (and maybe the true reason why The Bluest Star is after all a milestone for Free Cake For Every Creature) is that a general attitude of self-doubt, uncertainty and feeling out of place quite often makes way for the individual’s assertion of being totally lovely. And she is. 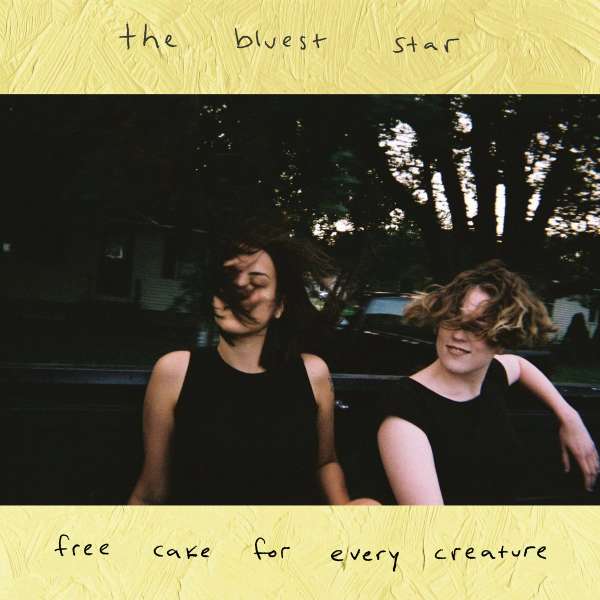 The Bluest Star was released in August 2018 on Double Double Whammy:
https://freecakeforeverycreature.bandcamp.com/album/the-bluest-star-3