It’s not often that we look towards the Middle East to discover new music with our Western-centered pop gaze. Which is one more reason to be grateful for the extremely reliable Austin Town Hall label, who somehow found Tel Aviv indie sextet Bones Garage and have just released the band’s second album Oi Ma Yeah digitally and on cassette (a format, incidentally, which we still eye with some suspicion here at Emma’s Housemusic HQ – we get that they’re cheap to manufacture but aren’t CDs as well? The appeal of being offered the smallest piece of ugly plastic available while not being able to navigate to a specific track of a recording remains lost on us …).

Bones Garage are a post-punk band who have the potential to attract a lot of indie kids, from dream pop to surf rock fans. The album’s beginning is spectacular. Preceding the glorious lead single „Topolopompo“ is the opener „Great Rift Valley“, slowly developing from some messy practice room sounds into a great riff and finally morphing into a restrained anthem, coming to full instrumental life properly in the last minute or so. The lyrics end with the falling bomb that will truly and ultimately unite the song’s two lovers. This is a theme that runs throughout the whole record and while it may be something hard to imagine for ourselves who have been lucky enough to live in peace in the middle of Europe for more than eight decades now, it is a dismal part of the band members’ daily lives. Which becomes most strikingly clear in „Grenades“, setting lines like „Me and my love / Are running from grenades / We’re running from the burning sky“ to a perfectly sweet Everything But The Girl-style piece of acoustic bar pop. Being from Israel, it requires some courage from Bones Garage to write and sing about these things in English. The band’s predecessor outfit sang in Hebrew, so this was probably a conscious decision made to reach a wider audience and it pays off both in terms of not hiding a heavy accent (which native English speakers will probably find adorable anyway) and in terms of exposure in the US and Europe. Not using their first language may even facilitate a more playful use of words (our favourite instance of this is Ariel’s title line in „I Have To Apologize“ being echoed by a male chorus going „Apolo! Apolo!“, not because it makes any sense but because it fits nicely – something a native speaker would probably be a little reluctant to write in a lyric).

Musically, you’ll detect a vast array of indie influences and styles on Oi Ma Yeah, possibly reflective of the fact that the members of the band come from very different musical backgrounds – ranging from straight guitar pop and dream pop via loud and dynamic shoegaze and surf-driven rock numbers to a sparsely instrumented ballad like „Back to the Ape“, with its rather compelling parallel of relating a love affair gone sour through the lense of a backward-evolutional story of the end of life on this planet brought on by man (evolutional history is another strong fantasy on the album, the end of three billion years of life on Earth darkening the lyrical edges of more than one of the songs on Oi Ma Yeah). But the strength of the songwriting and the musical skills of the band are more than sufficient to never let any suspicions of derivativeness arise, especially since the whole affair is beautifully and consistently held together by Ariel Pedatzur’s unique, raucous, husky voice. Oi Ma Yeah is a record that is shaped by the region it was made in and inventively explores ways to fit that into the Western pop narrative. We’re hoping it will find a lot of listeners. 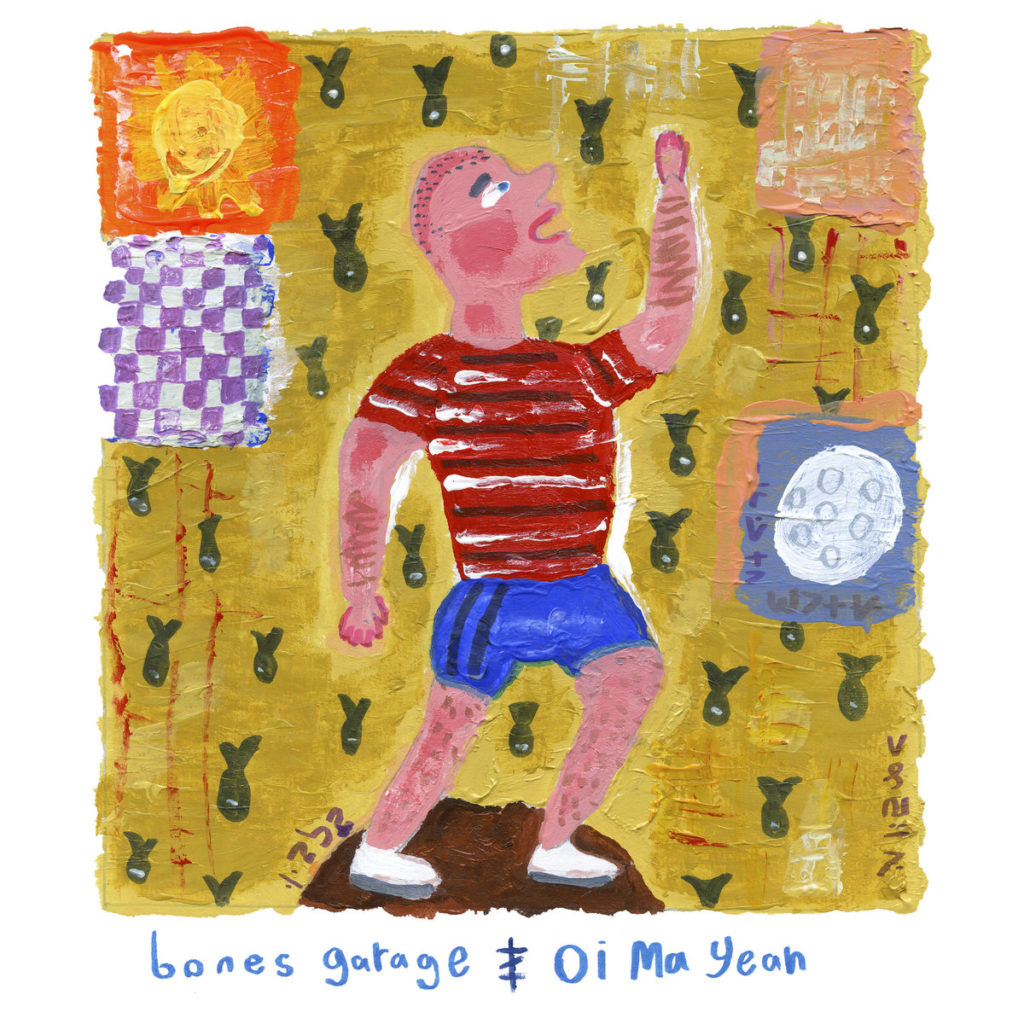